With the incredible accumulation of data spanning over 50 years now, the consensus is Finally emerging that the causes of canine hip dysplasia are only mostly environmental and very little to do with genetics.

It has been found and is common knowledge, that one can mate two parents with OFA rated excellent hips and have offspring that are dysplastic; or mate two dysplastic parents and get pups with normal to excellent hips. How is this possible? Some scientists go as far as to say that hip dysplasia is predominantly a biomechanics process, with genes playing a very limited part.

All puppies are born with perfectly normal hips.

Hip dysplasia is not a congenital defect; it is not present at birth. Multiple studies have demonstrated that all normal puppies are born with “perfect” hips; that is, they are “normal” for a newborn with no signs of dysplasia. The structures of the hip joint are cartilage at birth and only become bone as the puppy grows. If a puppy is going to develop hip dysplasia, the process begins shortly after birth.

Exercise is good and bad!  Exercise strengthens the muscles of the legs and pelvis, and this will increase the stability of the hip joint. But not all exercise is created equal.

Puppies raised on slippery surfaces or with access to stairs when they are less than 3 months old have a higher risk of hip dysplasia,while those who are allowed off-lead exercise on soft, uneven ground (such as in a large yard or  park) have a lower risk (Krontveit et al 2012). Dogs born in the summer have a lower risk of hip dysplasia, presumably because they have more opportunity for exercise outdoors (Ktontveit et al 2012) in the sunshine, fresh air and on dirt! On the other hand, dogs from 12-24 months old that regularly chase a ball or stick thrown by the owner have been found to have a higher risk of developing dysplastic hips (Sallander et al 2006).

The most critical period for proper growth and development of the hip in dogs is from birth to 8 weeks old, so the type of exercise the puppies are exposed to is most important during this time.

While puppies are growing rapidly, it is critically important to get their nutrition correct. What better nutrition can there be then what is found in a species specific diet – Dogs being carnivores, will thrive on a raw meat, bone and organ diet.

Some little known facts for you to think about:

By 1965, a mere 30 years later… Hip Dysplasia was identified in 55 breeds world-wide. And the skeletal problems didn’t stop there.

Think about this, how do you think it is that CHD (Canine hip Dysplasia) and later more structural issues could suddenly appear in just 30 years and spread rapidly through all breeds?

Did Hip and Elbow Dysplasia exist before 1935? If so, was it common?

If it were not in existence, where did it come from, what happened?

What does all of this mean if we are assuming that these diseases are inherited and can therefore be eliminated by genetic means? We’ve been trying to breed this out for 50 years and have not yet been really successful!

So if CHD truly is genetic in nature, then the genes which cause it, have had to have always been present in the dog population but were only “switched on” somehow in 30 short years. What happened after the 1930’s?

Up until the early 1940’s, people fed their pets on food scraps and raw meaty bones.

Since the early 40’s, disease in our pets has shifted drastically!  The widespread, across the board switch to processed commercial foods has resulted in a catastrophic increase in not only skeletal diseases but liver disease, pancreatic disease and cancer!

Do you know what is in processed, commercial dog food?   If you are still feeding processed kibble or canned food, and especially if you are breeder, I encourage you to take a long hard look at the ingredients in that bag and can and think about how it could be nutritious.  No matter what the pet food industry or veterinary industry try to tell you.   Think for yourself, do a little research.

Could it be that there is good profit derived from veterinary visits and work based on the genetic assumption?  There surely is not much profit in showing people how to raise pups to be free of disease is there? It is definitely much easier to be lazy and concentrate on genes… or using only pharmaceuticals or surgery to correct issues (much more expensive than nutrition and an explanation of age appropriate exercise!). 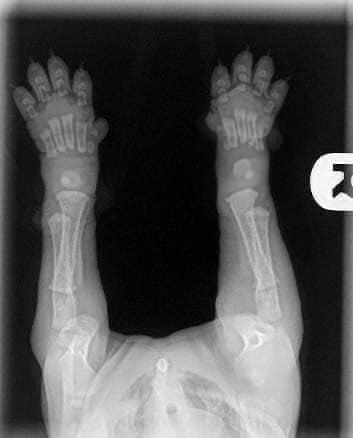 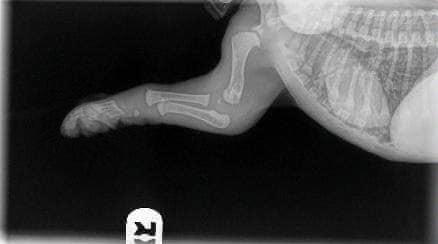